These Cucumber Tea Sandwiches are the perfect little bites that are made with white bread that has had the crust removed, spread with a smoked paprika dill cream cheese spread and sliced cucumbers.

Tea sandwiches are perfect to serve at lunch next to a bowl of hot soup or enjoy as an afternoon snack with a cup of tea.

I grew up eating cucumber sandwiches. My mom would spread some white bread with mayonnaise, place a layer of cucumbers on the bread and serve them up for lunch. She would cut them into either four triangles or quarters and us kids would gobble them down.

Little did I know back then we were eating what were considered tea sandwiches. The tea sandwich originates from the United Kingdom. It is often served at tea time to help hold off hunger until dinner time. Known in the U.S. as a snack!

This recipe is made a little differently than the way my mom would make our cucumber sandwiches. Instead of mayonnaise, I created a dill cream cheese spread that has a hint of smoked paprika. And, it was so good we did not want to stop eating them.

White bread. This is essential in my opinion for making this type of sandwich. I like to cut the crusts off, making them look dainter and even more appealing to kids!

Cucumbers 🥒, my preference is the English cucumber as they don't have the seeds a regular cucumber has.

Cream Cheese, use full fat or reduced fat, either works.

Fresh dill weed, be sure to mince it before you measure it.

*If you made this recipe, please give it a star rating* 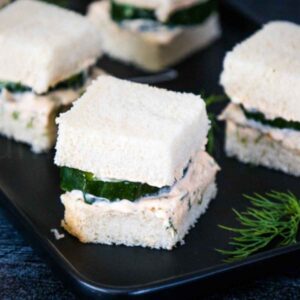 Shelby is the author/owner of Grumpy's Honeybunch. Established in 2007, she shares and preserves family recipes as well as recipes for cooking light and keto. She has authored the One-Pot Paleo Cookbook and The Pescatarian Keto Cookbook. She is an experienced, self-taught home cook who loves to share recipes with others. She also authors the websites Honeybunch Hunts and The Best Vegetarian Recipes. You can see her work on websites such as Veal Made Easy, Parade, Community Table, SoFab Food, Yummly, and FoodGawker. 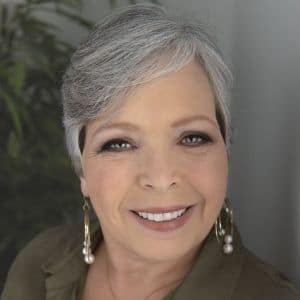 Welcome! I'm Shelby, author of The Best Vegetarian Recipes. Here you will find family favorite vegetarian recipes old and new that will help you balance out your diet whether you are following vegetarian, pescatarian, or a plant-based diet. about me!